Keep yourself updated in this lockdown and use the time to become the best version of yourself. Ambition Quest Institute Chandigarh here gives you the current affair capsule divided into sections. Ab selection durr nahin 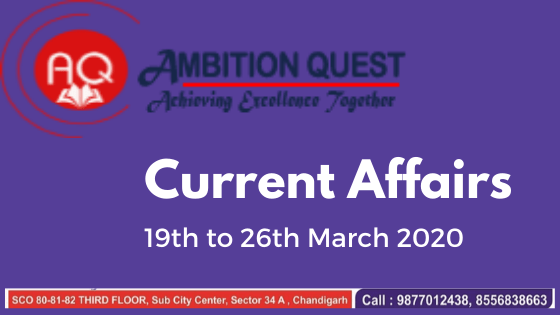 1.      The U.S. Centers for Disease Control and Prevention (CDC) has introduced an AI bot called Clara to help people in assessing the potential symptoms of COVID-19. The CDC has partnered up with CDC Foundation and Microsoft Azure’s Healthcare Bot service to create Clara.

2.      The IMF has launched a Tracker of Policies Governments are Taking in Response to COVID-19. The policy tracker covers the responses on the basis of three pillars, namely: Fiscal; Monetary And Macro-Financial and Exchange Rate And Balance Of Payments.

3.      Famous Indian footballer Sunil Chhetri selected for FIFA campaign against Covid-19. WHO and FIFA have joined hands to fight the coronavirus by starting a new awareness campaign which will be led by world-renowned footballers.

·       Headquarters of WHO: Geneva, Switzerland

5.      Netflix Inc (NFLX.O) has established the fund of $100 million to help workers on television productions and films which have been badly affected due to the global COVID 19 outbreak.

6.      Greecehanded over the Olympic Flame to Tokyo 2020 organizers after the suspension of Greece leg of torch relaydue to the COVID-19 pandemic.

8.      President of the United States of America, Donald Trump has signed a $100-billion emergency aid package to ensure sick leave of the American workers who fall ill from the COVID-19. The relief package will facilitate free coronavirus testing for the needy.

1.      The Finance minister Nirmala Sitharaman has announced scheme named Pradhan Mantri Garib Kalyan worth package of 1.7 lakh crore rupees which will assist the migrant workers and poor people affected by the lockdown amid COVID-19 pandemic.

3.      GoI has banned the export of anti-malarial drug Hydroxychloroquine and the formulations made up of it within the wake of COVID-19 outbreak.

4.      Ordnance Factory Board (OFB) has designated 285 beds for isolation wards in handling Coronavirus cases. The OFB is also trying to produce personal protection equipment and face masks as per the order placed by HLL Lifecare Limited (HLL).

5.      Election Commission of India has permitted the use of indelible ink on persons for stamping for home quarantine by health authorities’ insight of COVID-19.

6.      Odisha’s Chief Minister Naveen Patnaik launched Mo Jeeban programme in Odisha for the containment of COVID-19 pandemic. Through Mo Jeeban programme, the chief minister of Odisha urged the people of the state to take a pledge to stay indoors.

7.      Indian Prime Minister Narendra Modi has announced the complete lockdown of the entire nation for 21 days from 25th march 2020 to 15th April 2020. This step has been taken as a part to tackle COVID-19.

8.      Union Finance Minister Nirmala Sitharaman has announced the that the Finance Ministry has decided to extend the Income Tax Return (ITR) filing deadline for the Fiscal Year 2019 from 31st March 2020 to 30th June 2020.

10.   Telugu New Year day Ugadi was celebrated on 24th march 2020. The festival was celebrated across both the Telugu states Telangana and Andhra Pradesh to mark the beginning of the Hindu Lunar calendar.

11.   My lab Patho Detect COVID-19 Qualitative PCR kit has been approved as the first Made in India COVID19 Test Kit to get the CDSCO approval.

12.   The Rajya Sabha elections got deferred by the Election Commission of India.

13.   Indian Oil Corporation Limited has started the supply of BS-VI fuel across the nation. Bharat Satge-VI is the world’s cleanest fuel containing just 10 parts per million of sulphur.

14.   The United Kingdom is confirmed as the first co-chair of the Governing Council of Coalition for Disaster Resilient Infrastructure (CDRI). CDRI is an India-led global climate initiative which was established by Indian Prime Minister Narendra Modi at the UN Climate Action Summit 2019.

15.   With the introduction of the taser guns as part of police weapons Gujarat has become the first state in India whose police is equipped with the modernised weapons. The taser guns is an electrical weapon that use compressed nitrogen to fire by sending electricity through attached wires which disrupt voluntary control of muscles.

16.   Shivraj Singh Chouhan was sworn in as Chief Minister of Madhya Pradesh.

19.   Uttarakhand government has abolished reservation in promotion in the state government jobs.

20.   The RBI will infuse liquidity funds of Rs 30,000 crore by purchase of Government securities under Open Market Operations (OMOs) to maintain financial stability in the Indian economy due to outbreak of COVID-19.

23.   The GOI has approved the proposal of setting up of National Technical Textiles Mission with an outlay of Rs. 1480 crores. The mission would be set up for a period of 4 years from 2020 to 2024.

24.   Indian Navy has established a Quarantine Camp at INS Vishwakarma in Eastern Naval Command for Indian nationals being evacuated from COVID-19 affected countries.

25.   The Supreme court of India cleared permanent commission for women officers in the Indian Navy. A bench headed by Justice D Y Chandrachud said there cannot be any excuses for not granting gender equality in the armed forces.

1.       Chander Suta Dogra has launched a book Missing in Action: The Prisoners Who Never Came Back. The book is published by Harpercollins and addresses the missing Indian soldiers during the mission of 1965 & 1971 Indo- Pak wars.

3.       ‘Messiah Modi: A Great tale of expectations’authored by senior journalist & author Tavleen Singh is released. The book is published by HarperCollins India.

4.       “My Encounters in Parliament” authored by Bhalchandra Mungekar released.

5.       The book titled “Invincible – A Tribute to Manohar Parrikar”, authored by Tarun Vijay was released by defence minister Rajnath Singh on 16th March 2020.

2.      The Indian Ministry of Defence has signed the capital acquisition contract of worth Rs 880 crore with Israel Weapons Industries for the procurement of Light Machine Gun (LMGs).

1.    The International Olympic Committee and Tokyo Olympic organizers agreed to postpone the Tokyo Olympics Games to 2021 as the world battles the coronavirus pandemic.

2.    Vrinda Rathi and Janani Narayanan have been named in the International Panel of ICC Development Umpires.

1.   The International Day of Solidarity with Detained and Missing Staff Members was observed on 25thMarch by the United Nations on the anniversary of the abduction of Alec Collett.

2.   The International Day of Remembrance of the Victims of Slavery and the Transatlantic Slave Trade was observed on 25th March. The theme of day for year 2020 was “Confronting Slavery’sLegacy of Racism Together”.

4.   The International Day for the Right to the Truth Concerning Gross Human Rights Violations and for the Dignity of Victims was observed on 24th March. This day is observed every year to pay tribute to “Monsignor Óscar Arnulfo Romero” as he was murdered on 24 March 1980.