SSC (Staff Selection Commission) is the department that has an onus for recruitment of staff on various posts in different government ministries, departments, and in their subordinate offices. Different exams for different posts are conducted throughout the year for the selection of candidates.

Every year many vacancies are released by the department for various posts and selections are made after different rounds depending upon the need of the post. The increasing competition and the growing industry have raised the need for the best SSC CHSL coaching institute in Chandigarh.

Ambition Quest Institute provides structured coaching with detailed concept study and short tricks. SSC not only provides job with a better salary but also provides candidates with other perks of a government job. Moreover, getting selected for the SSC after competing so many candidates itself becomes a booster for the candidate.

SSC examination is a detailed process but requires lots of dedication and planned strategy to get through the long selection procedure. Every single post consists of different selection patterns and rounds. SSC examines Grade B, CHSL, MTS, and Technical post. Every single category is of its type and demands the preparation according to the examination pattern, subjects involved, tiers of examination and grade of vacancy. Ambition Quest Institute provides step by step guide to clear the various tiers of examination synergistically. We provide the best teachers whose knowledge is at par and they not only teach students for SSC examination but also help them with different short tricks and methods which help them to shine out in the crowd. Ambition Quest Institute provides best SSC exam coaching with a competitive environment and supportive teachers. The SSC coaching not only prepares a candidate to clear the exam but also focuses on improving the overall knowledge of the candidate. To do a particular thing there are different ways our teachers improve the candidate to attempt the things in the best possible way.

AQI is the best institute for SSC CHSL/CGL Coaching Chandigarh. The institute focuses on every single aspirant and believes combined success. AQI considers student’s success as institutes success and puts every single effort to make sure that students get through with applied examination.

Various examinations conducted by SSC are mentioned below:

SSC is currently performing its functions as a subordinate office of the DOPT, the SSC holds the responsibility for the recruitment to various posts in different departments. The Staff Selection Commission is responsible for conducting below-mentioned examinations: –

SYLLABUS FOR CGL/CHSL/CPO/MTS FOR ALL INCLUDED SUBJECTS IN SSC COACHING:

NOTE FOR FINAL YEAR APPEARING CANDIDATES: – All the aspirants who are appearing in the final year of their respective graduation are equally eligible to apply for the post as per their qualification, they are required to fulfill all educational requirements on or before 01st January 2020. All the aspirants who are graduating from any of the open or distance universities need to ensure that the university or the institute from which they graduate has to be recognized by the Distance education Council, IGNOU.

COMPUTER PROFICIENCY TEST (CPT): – Aspirants who are applying for the below mentioned posts needs to appear for the COMPUTER BASED PROFICIENCY (PT) TEST: –

AGE CRITERIA and Pay grades: – The age limit vary with the position and department applied for. Aspirants can refer to the mentioned official link of website  https://ssc.nic-online.in/cgl-notification-2019/ for minimum and the maximum age limit and also the pay grade they will receive for the post and the department they are interested in applying for.

Every year SSC CGL examination is conducted once in every year. This article provides all the information regarding the whole procedure for different tiers of examination including the computer proficiency test and the interview rounds. Aspirants can refer to the below-mentioned chart to get a fair ides of SSC CGL rounds and can accordingly join SSC coaching for their preparation. 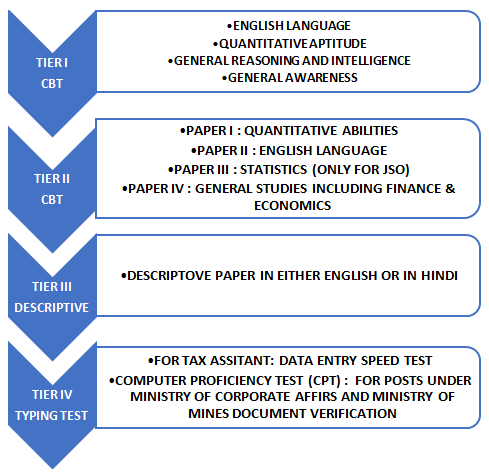 Tricks that can help in SSC CGL/CHSL Exam Preparation:

It’s a fact that SSC examination is a time taking selection procedure and demands high-level dedication and focused efforts from aspirants. It happens in spite of hard work candidates fails to crack the examination. It’s a quote well said ‘’there is a fine line of difference in hard work and smart work’’. Aspirants are advised to follow the below-mentioned points and make strategies during their SSC Coaching and even afterward.